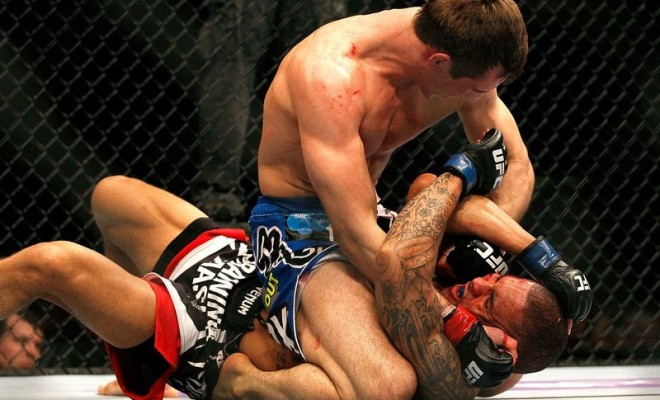 Mixed Martial Arts is the most popular combat sport of our time and for good reason: it combines striking techniques with grappling and ground fighting. As far as full-contact competition goes, it doesn’t get much more intense than that. However, it is still a competitive event, one with (increasingly more) rules and prohibited techniques: head butting, biting, hair pulling, eye gouging, attacking the throat, clawing or ripping techniques, kicking a downed opponent, the list goes on and on.

These limitations make MMA fights safer for the competitors but simultaneously drive it away it from what routinely happens in a street confrontation. If you want to use your Mixed Martial Arts techniques for self defense, you have to make some tweaks and changes first. Here are some you can apply right away:

In the Octagon, you only have one opponent. In the street, you never know how many you’ll have to fight. An altercation can start with just one aggressor but he could have an accomplice ready to attack you in the back. Or his friends might notice what’s going on and come to his help. Prepare for the worst and assume a multiple opponent situation is always in the cards. This means you don’t want to prolong the fight but end it as quickly as possible.

Train to defend against weapons

Mixed Martial Arts training teaches brutal and effective techniques but it is an unarmed combatives system. In a self-defense situation, you always assume the other guy has a weapon even (or especially) if you don’t see him holding one. For instance, many knife attacks start out by the attacker holding the weapon out of sight, hiding it until the first stab or cut is launched.

If you want to survive the mean streets, practice your techniques against not only unarmed attackers but also against those using, knives, sticks, baseball bats and all the many other weapons that are used in the street.

MMA contests are duels in which two opponents try to beat each other either on points of by KO. Though knock outs do happen a lot, it’s very common to see MMA fights take five to ten minutes, sometimes a lot more. In the street, a confrontation can already be over in a couple of seconds. You often don’t have the time to soften up your attacker, look for his weaknesses or use a complicated strategy to beat him. On the contrary, the first three seconds usually determine who comes out on top.

To prepare for this, practice fast, all-out blitz fighting, using every ounce of both strength and speed you have to immediately overwhelm your opponent. If you can make it through those first three seconds and stop your attacker from hurting you, your chances of survival increase dramatically.

Develop knock out power in all limbs

Most MMA fighters have a preferred technique: the straight knee, the left hook, the leg kick, etc. They train many different ways to set it up so they can catch their opponent with it. But this strategy can take several rounds to be effective. When you’re attacked in real life, you don’t have the time or opportunity to set your attacker up for your favorite technique. It could all be over in a few seconds so you need to make each strike as devastating as possible.

Train hard to have the power to put an aggressor down with either arm or leg, from both long, medium and grappling range. Simply because you won’t necessarily get a choice in the matter.

These concepts are practical and easy to learn but they can save your life if all the fighting you’ve done so far is in the the controlled environment of the gym or in tournaments. With some dedicated practice, you’ll quickly be able to use your skills successfully both inside the Octagon and on the street.