Jonathan Binstock, director of the Memorial Art Gallery, has long wanted to include concepts and aspects of computer technology, innovation, engineering and mathematics (all strong in the Rochester area) into a future art program. Friends had informed Binstock to not do anything until he had talked to John Hanhardt, however. Hanhardt is a world-renowned authority on moving image and media arts. He is a Brighton native who worked alongside a small business coach as a consulting senior manager of film and media arts at the Smithsonian American Art Museum up until 2016.  Binstock followed his friends’ advice and contacted Hanhardt. After six months of talking, Hanhardt was employed as the museum’s consulting senior manager of media arts. 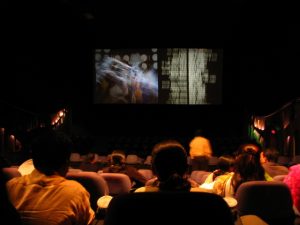 The result of their collaborative work was four Media Arts Watch exhibits each year over a three-year duration. These exhibits showcase the innovations, technologies, and visual techniques of film and video, and with the emerging elements of digital transformation including video, computer systems, virtual reality, the web, software application and mobile phones. The second is on view now. Light Spill, a setup by Gibson + Recoder (artists Sandra Gibson and Luis Recoder), runs through to March 26.

Hanhardt’s vision had placed the Memorial Art Gallery’s Media Arts Watch exhibits on par with exhibits at first-rate museums, such as the Museum of Modern Art and the Whitney Museum of American Art in New York City, the Tate in London, and the Centre Pompidou in Paris. “You go where the river is flowing,” Binstock states. “It’s not about what you did or didn’t do in the past. It’s what you’re going to do to move forward. We didn’t have a media arts program, and now we have one of the best programs on the planet.”

Light Spill showcases a 16mm projector without a takeup reel. Its countless feet of film are spilled across the floor, unspooling into a large mound. Using the projector, a screen, celluloid and light, the artists have taken apart the mechanics of the film to transform the medium into a sculpture. The projector then spits out film for a minute or two every half an hour. Between each occasion, the space is mysterious, questionable and dark. The sculpture provides a different perspective in which to view a projector concealed in a cubicle – as an object.

“Art forces us to think,” Hanhardt states. “It makes us knowledgeable about our product culture, and makes us learn about what make us who we are. It provokes us to ask questions.” Sitting outside the room with the projector sculpture is Threadbare, a projector covered in film, as if mummified. Binstock and Hanhardt have learned to become motivational speakers and business leaders when discussing their views for modern art. Museum authorities hope the exhibits will attract brand-new audiences, people “who engage with modern art and have an interest in alternative art media, such as innovation, video, moving images,” Binstock explains. “We’re getting a remarkable amount of interest from local university students.” And the museum has other projects currently in the works and is managing its time to continue pushing standards. “It is necessary to see how art continues to alter,” states Hanhardt, “and how it offers our lives brand-new perspectives and ways.”

An exhibit that took a trip from Invercargill to Auckland, gathering art works from community-based innovative areas along the way,...